One of the trends we've seen since over the past few years in the Big Bear real estate market has been a notable increase in the number of cash sales. Here is a ten year history showing the percentage of homes in Big Bear that have been purchased with cash instead of financing. 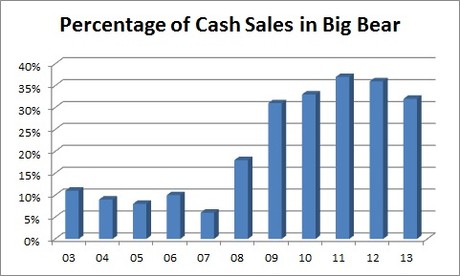 From 2003 until 2007, qualifying for a mortgage was quite easy. At that time, rates were historically low. These two factors made financing a BIg Bear property not only easy but quite inexpensive. As we know now, the ease of qualifying for these mortgages was toxic to the market as it created an increase in sales made by truly unqualified purchasers.

After the market crash in 2008, lending criteria became quite restrictive. Very few people could qualify for loans as banks were realizing how many toxic mortgages they had on the balance sheets. The last thing they needed were more non-performing assets. Because of this, the Big Bear real estate market saw the number of home sales plummet as many buyers could not secure financing. As such, buyers who were capable of doing so purchased with cash. Thus the dramatic increase in cash sales from 2008 through 2013.

As the real estate market has slowly recovered and banks have loosened up their lending requirements, we are still seeing almost a third of homes in Big Bear being purchased with cash. Based on my experience, I attribute this to the absence of stated income loans in the mortgage market. There are many capable buyers who show very little income on their tax returns as they shelter their tax liabilities in corporations or other such financial vehicles. Being that their tax returns show so little income, they cannot qualify for a mortgage and paying cash is their only viable purchase option.

It will be interesting to see if and when cash sales become a smaller fraction of Big Bear home sales. I would imagine that as lending standards continue to be more inclusive, more people will be able to take advantage of today's record low rates. But there will always be a place for cash sales, as their are those who are fundamentally against borrowing money as well as those who realize the advantage that a cash offer makes in negotiating the purchase of a home.