With the overall health of Big Bear's economy in large part revolving around the overall health of Big Bear Lake, those of us interested and invested in Big Bear real estate like to keep a close eye on the lake's water levels. In a year in which the lake's water levels have fallen to their lowest point in over 50 years, it seems like more misinformation and uninformed prognostications than usual have crept into the various narratives surrounding the past, present, and future of Big Bear Lake.

So I wanted to share some historical information about the lake and dispel some of the more common myths surrounding Big Bear Lake's water levels.

Being that a picture is worth a thousand words, let's start with taking a look at this figure of 50 years of water level measurements of Big Bear Lake taken in the month of December. (Source: Big Bear Municipal Water District Lake Measurements) 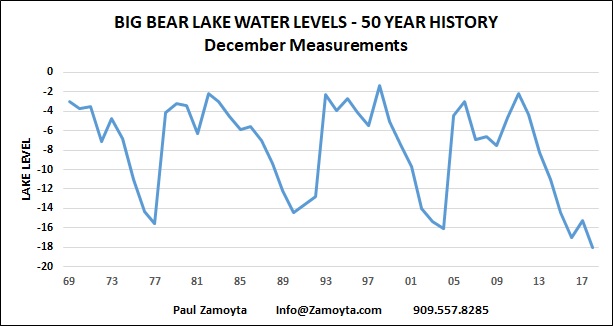 Although the lake is at it's lowest point in over 50 years, there has been a fairly regular pattern of ups and downs of water levels over time. Also of note from this graph, it appears that when Mother Nature does decide to show up, the lake fills quite quickly, often in the course of just one winter and following spring.

There is certainly no guarantee that this pattern will continue. But we all know that history has a way of repeating itself, and if that ends up being the case, we are due for a refill of the lake quite soon.

With this history in perspective, let's take a look at some of the most common misconceptions revolving around Big Bear Lake's water levels. (Source: Big Bear Municipal Water Department - Fact or Fiction)

WATER BEING TAKEN FOR SNOWMAKING IS DRAINING THE LAKE.

FALSE - The truth is that snowmaking takes only about 3.5 inches from the lake with about half of this returning to the lake as spring snow melt.

THE LAKE IS LOW BECAUSE WATER IS RELEASED TO FARMERS DOWN THE HILL.

FALSE - The truth is that the lake district has been purchasing water off the hill to satisfy contractual obligations. This helps keep more water in our lake!

THE LAKE IS LOW BECAUSE OF CONSTANT WATER RELEASES.

FALSE - Yes, there is a mandate that a certain amount of water be released constantly from the dam for environmental reasons. But this only accounts for about 2 inches of lake level each year. In perspective, annual evaporation accounts for about 3.5 feet of surface loss!

THE LAKE IS AT ITS LOWEST POINT EVER!

FALSE - The truth is that the lake was 51 feet down in 1956, BEFORE the Lake District was formed to help manage water levels. It is because the Big Bear Municipal Water District was formed that we are able to keep devastating lake levels like these from occurring again!

With the lake's water level having risen 4 inches in the just last few weeks, I am hoping this is just the beginning of what will end up being one of those winters in which our lake will look remarkably different come spring time. But don't get complacent! Keep doing those snow dances so Mother Nature knows how badly you want a very white (preferable) or wet (we'll take what we can get) winter!